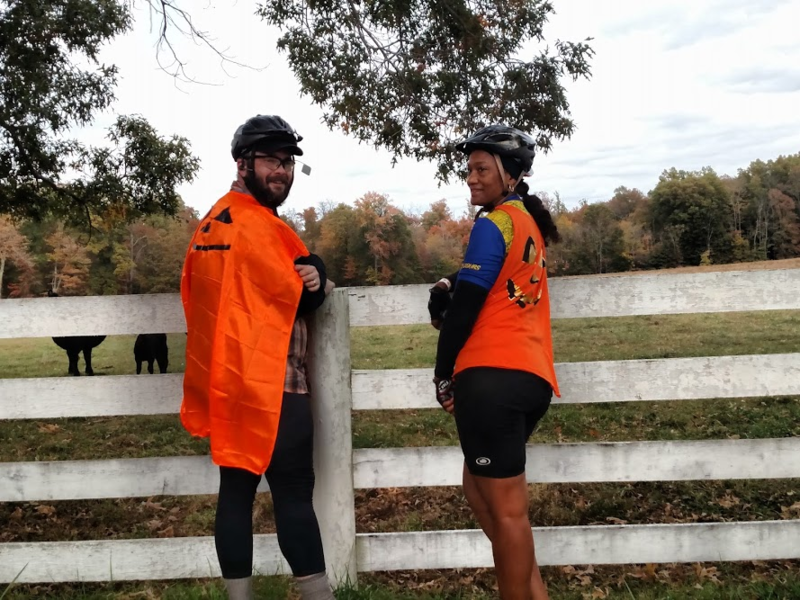 Earlier in the year I was chatting with my friend Reba and she mentioned a fun ride she was planning to do down in Fauquier County called The Great Pumpkin Ride. It is a charity ride for the Fauquier Trails Coalition with a 67 mile ride as well as some shorter distances in scenic Fauquier County. The ride is limited to 1,250 riders and is quite festive, with many cyclists dressing up in costumes. I decided to don an orange cape with a jack-o-lantern pattern on the back (made with electrical tape), and Reba also wore a more stylish orange cape with a screen printed jack-o-lantern. It all happened on October 24th, 2015 and it was a blast. 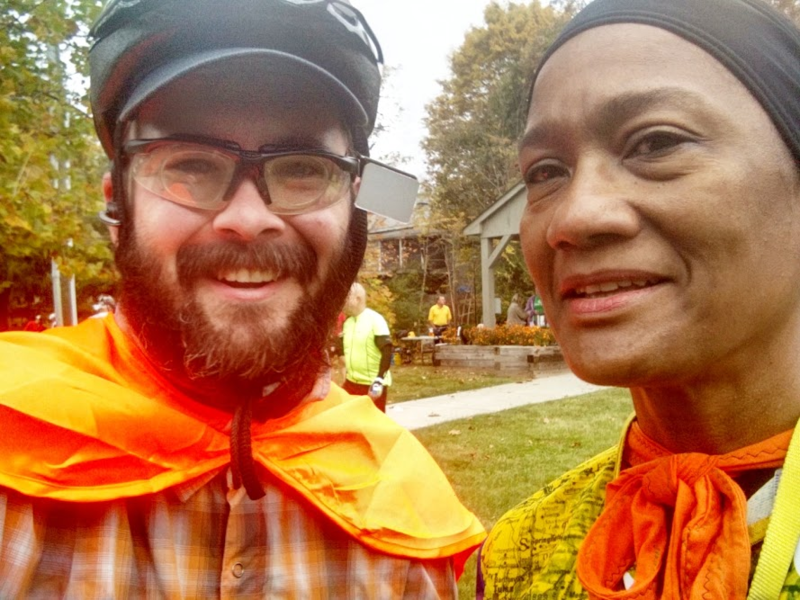 In the morning I got up before dawn and made my way down to Warrenton to meet up with Reba and her husband Robert for the 9AM start of the 67 mile route. The ride started at the entrance to the Warrenton Branch Greenway where it continued for almost a mile and a half before going out onto the scenic roads of the area. The route to the first stop was mostly downhill, so the three of us really made some good time. The color of fall was out in full force, and while the temperatures were cool, the wool base layer sand my knee warmers did the trick keeping me comfortable. The first rest stop was at a church and was well stocked with water and gatorade. While there we saw our friend Dave from DC who was also doing the ride. 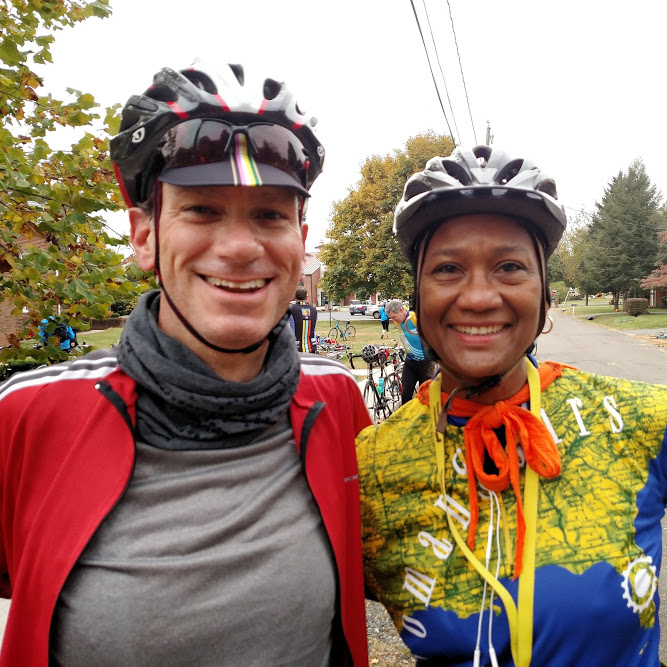 The next leg of the trip was a bit more rolling, but the terrain was never overly difficult. Reba and I got a lot of compliments on our capes as we biked through the countryside. Robert's Rock Racing jersey also got a lot of attention with its Halloween appropriate styling. The next stop was also a church and it had a bunch of snacks, including some of the most delicious miniature pumpkin whoopie pies I've ever had. After grabbing a quick bite and getting some water we made our way to the next stop which promised another treat, beer. 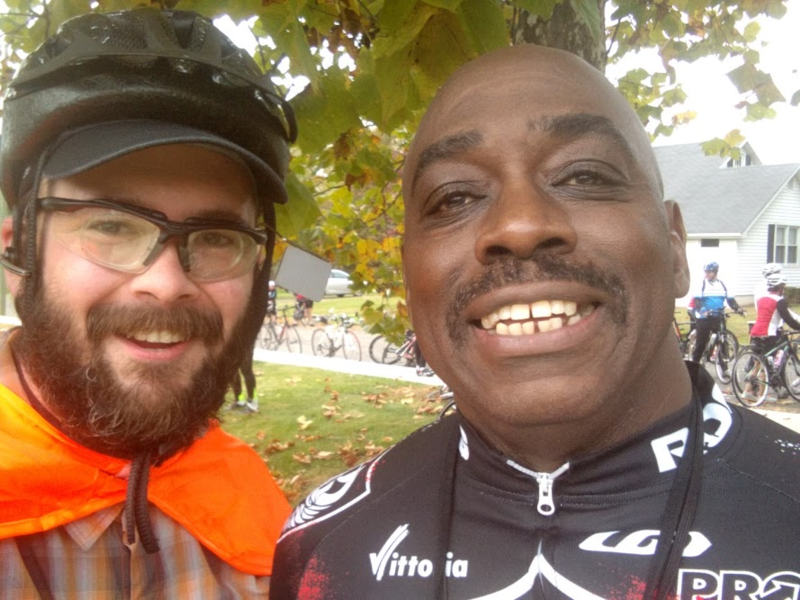 As we headed to Old Bust Head Brewery the route headed upward and we got a bit more climbing in. Fauquier County's beauty was definitely on prominent display as we went down its country roads. Everyone was excited to be have the next rest area be at a brewery and after 55 miles, Old Bust Head Brewery did not disappoint. They were sampling a couple of their beers, an Oktoberfest and their Old Jail Pumpkin-Peach Brown ale. Both were quite refreshing after the mileage. There was live music on offer inside and food trucks to supplement the food at the SAG station. I saw my friend Karen there and enjoyed the food and drink.
From there it was back to our bikes for the last 12 miles or so which brought us some of the most consistent climbing of the route, although nothing too bad. When we got back into Warrenton we made our way to have some beers, food, and conversation about the fun ride we had just enjoyed together. 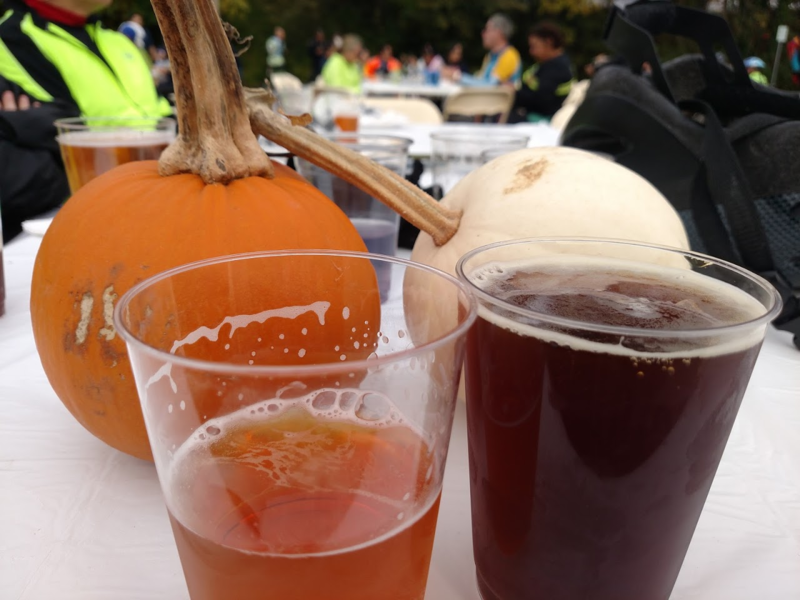 I'm glad I joined Reba and Robert this year, any excuse to ride with a orange superhero cape on is a good one.