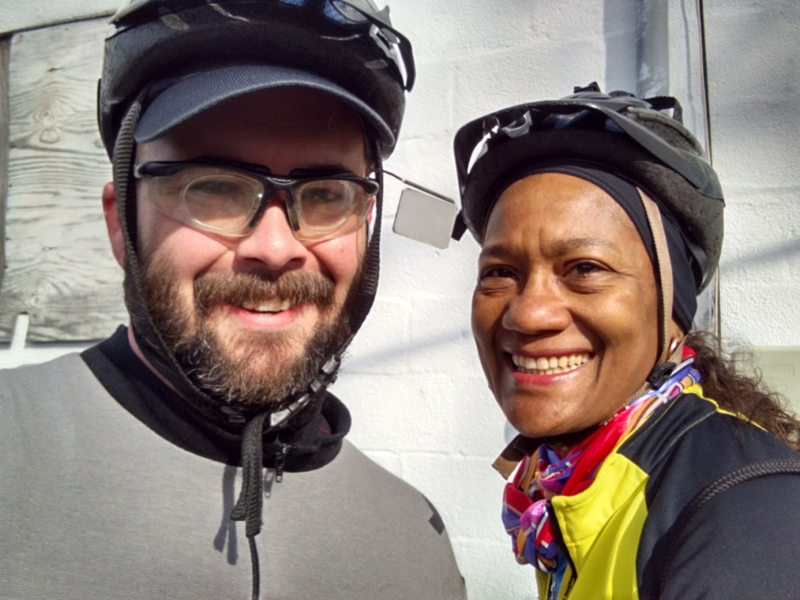 After having such a wonderful time on the Great Pumpkin Ride with Reba and Robert I was eager to have another fun ride and WABA's Cider Ride seemed to fit the bill. The ride came in two flavors, a shorter 23 mile "McIntosh" route, or the even more delicious "Honeycrisp" route at 47 miles. Needless to say, I preferred the Honeycrisp option and I was lucky enough to be able to join Reba once more for the ride.
We parked downtown a few miles from the start and made our way to the Dew Drop Inn. When we got there we were greeted by our friend Sam who handed us our cue sheets and wished us well. The ride was a "show and go" style ride, so after getting our bearings, we set out with a group and made our way on the Honeycrisp route. We were on city streets for the first few miles and then got onto the Northwest Branch Trail and then the Northeast Branch Trail. As we wound our way around the Northeast Branch of the Anacostia, we went around the end of College Park Airport, which is the oldest continuously operated airport in the world. Shortly thereafter we took a ride alongside Lake Artemesia before joining the Paint Branch Trail as we deftly avoided the busy Route 1 we were soon to cross. After a short climb we crossed Route 1 and made our way to the first pit stop at Proteus Bicycles.
While at Proteus I had some of the cider and doughnuts on offer chatted with a few friends who I knew while there. Next we made our way to Rhode Island Avenue toward Beltsville where we rode onto the grounds of the Beltsville Agricultural Research Area. Here the traffic significantly reduced and we enjoyed the views of the research farms on gently rolling terrain. Our next (unofficial) pit stop was at the Patuxent Wildlife Research Center. From the entrance there is a loop road that is popular with area cyclists that ends in a surprisingly large visitor center where we took a break and enjoyed looking at a craft fair that was taking place that day and got some fresh water. It looks like a cool place to visit when you've got time to walk around with exhibits in the visitor center and paths around the area.
After completing the loop and retracing our route a bit on Powder Mill Road, we went down Springfield Road to Beaver Dam Road and then back to Research Road, where we had a good climb up the hill on a mostly closed road. Shortly thereafter was our next pit stop at Greenbelt Lake Park. It was surprisingly pretty with a brightly colorful sylvan scene alongside the lake. Water and cider were in ample supply, as were assorted pies. While there we saw a few of our friends, including Ted and Dave from coffee club. Dave and Jean were doing the route on their tandem.
Next we made our way through Greenbelt and I started noticing my pedal start to click and make noise. I knew this meant in was soon about to fail from prior experience, so I tried my best to use good technique and baby it so it would last for the rest of the trip. We entered Greenbelt (National) Park and headed over to Riverdale Park and then Hyattsville to the Trolley Trail. Reba noticed the Arrow Bicycle Shop close to the route, so we went in there and the mechanics were very helpful. They are a Speedplay dealer, so they had all the right tools and shot some fresh grease into the pedal to give it a better chance to make it home. Really nice guys, and if you're in the area they are worth a visit. From there we continued for the last few miles on the Anacostia River Trail and then back onto the streets of Colmar Manor and Mount Ranier until we got back into DC for the final segment back to the Dew Drop Inn.
Once we got to the finish line, we were given a nice green mug with the Cider Ride logo on it and the opportunity to fill it with beer for a discount at the Dew Drop Inn. We enjoyed sharing a frosty beverage with several friends, including Dave who we had seen earlier and John who had started a little before we arrived. A good time was had by all.
Afterward Reba and I made for the exits and headed back toward the car, but we were a bit hungry, so we decided to make a stop at Habesha for some delicious Ethiopian food. I had the raw kitfo and devoured every bit of its deliciousness encased in pillowy soft injera. After enjoying our meal we returned to the car, put our bikes on the rack, and headed on home.
Another great ride with friends in the books. 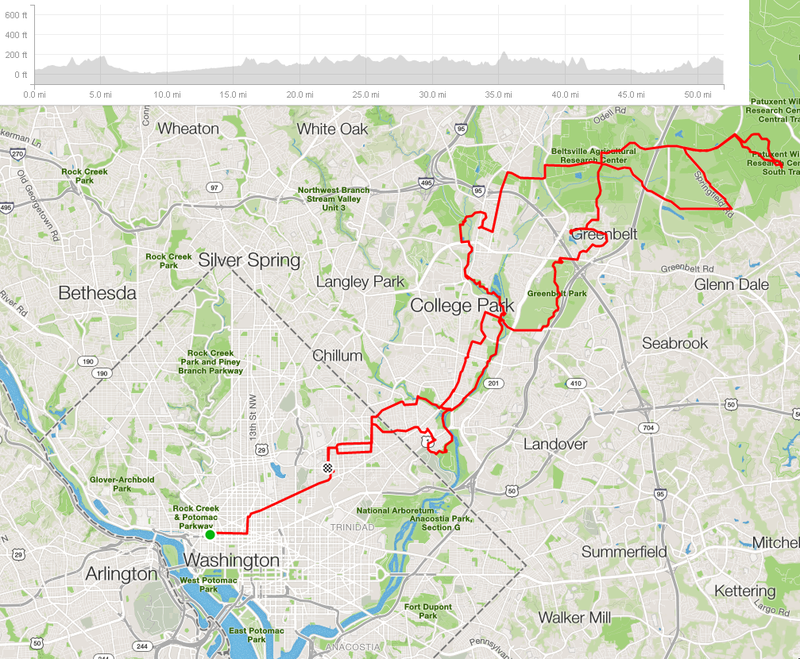